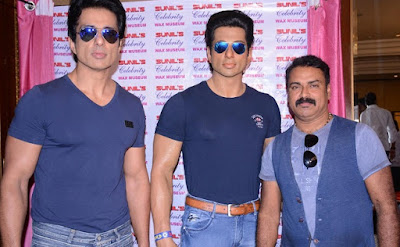 The wax statue of the actor, who has featured in hit films like "Dabangg", "Happy New Year" and "Jodhaa Akbar", was uncovered by Minister of State for Home (Urban) Deepak Kesarkar.

Sunil Kandalloor, the sculptor and Managing Director of the Sunil's Celebrity Wax Museum, made Sonu's wax statue in the duration of three months.
"Sonu Sood is one of the most experienced and self-made actor who acts in Hindi, Punjabi, Tamil and Telugu movies," Kandalloor said in a statement.

In 2010, Kandalloor opened an International Wax Museum in Lonavla, near Pune, which houses 100 wax models of national and international personalities. His museum has become a tourist attraction. Some of his works include wax models of celebrities like Prime Minister Narendra Modi.