Superstar #Shah_Rukh_Khan says he will miss actress #Anushka_Sharma, who has wrapped up the schedule for their upcoming film directed by #Imtiaz_Ali. 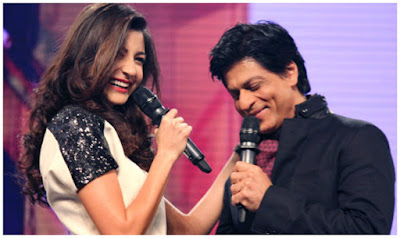 Shah Rukh tweeted on Tuesday: "Anushka Sharma wrapped the schedule of film allegedly called 'The Ring'. Will miss her lots...kya karein (What to do)...‘Aye Dil Hai Mushkil'. Thanks for being you."

"The Ring" is the first time the "Don" star is collaborating with director Imtiaz Ali for a film. They had recently wrapped up the Prague schedule of the shoot.
This is the third time Anushka and Shah Rukh will be seen in a film together after "Rab Ne Bana Di Jodi" and "Jab Tak Hai Jaan".

The "Band Baajaa Baaraat" actress made her Bollywood debut opposite the superstar in 2008 with the film "Rab Ne Bana Di Jodi".