Bollywood actor #Sushant_Singh_Rajput, who has been lauded for his role as cricketer #Mahendra_Singh_Dhoni in a biopic, on Thursday met Haryana Chief Minister #Manohar_Lal_Khattar here. 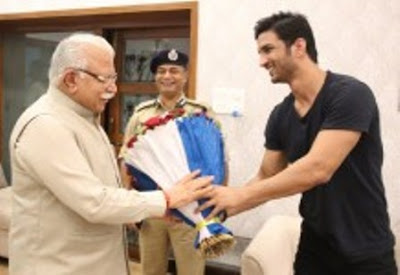 Photographs of Sushant and Khattar were shared on the official page of Office of Chief Minister, Haryana on Thursday.

In one photograph, the "Kai Po Che!" star is seen handing a bouquet of flowers to Khattar. And in another image, they can be seen sitting and talking.