Women in rural India struggle with #menstrual_hygiene not just due to issues with accessibility and affordability of sanitary products, but because of the taboos and superstitions surrounding the monthly periods, according to Arunachalam Muruganantham, well-known social entrepreneur and inventor of the sanitary pad making mini-machine. 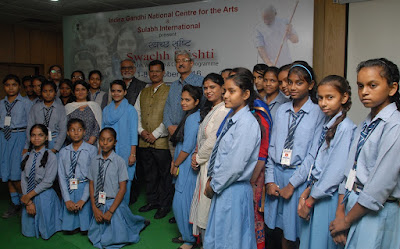 Padma Shri awardee Shri Muruganantham, who delivered at talk at the Indira Gandhi National Centre for the Arts (IGNCA) as part of its ongoing ‘Swachh Srishti’ programme, said he regularly encountered odd and often dangerous beliefs and practices among rural women during his nationwide campaign to build awareness about menstrual hygiene.

“I’ve heard some women say they fear they may lose their eyesight if they use sanitary pads, there are others who believe if someone stepped on your used sanitary pad it will result in death in the family,” he said, adding that the taboo surrounding the subject also causes women to follow unsafe practices such as using dry leaves, ash & newspapers as substitutes for clean sanitary pads. “Many are not aware that such practices are dangerous and may cause infections and long-term health problems.”
A school drop-out from Coimbatore in Tamil Nadu, Shri Muruganantham invented the low-cost sanitary pad making machine 12 years ago after watching women in his own household struggle during their periods, and he has since been campaigning to bring about a change in the traditional unhygienic practices around menstruation in rural India. He terms it the ‘Silent Pink Revolution’.

To his large audience at the IGNCA, consisting mainly of schoolchildren, Shri Muruganantham had a key message on innovation: “do not spend your time waiting for opportunities to come your way, but find a problem the society has and find solutions to it”.

Shri Muruganantham says his company does not use marketing or advertising to promote the products, but campaigns door-to-door across the country which helps them understand the problems better. His company employs over 40,000 women for manufacturing the sanitary pads and currently has a turnover of USD 200 million. It has successfully marketed the machine in 19 countries and plans to reach out to over 100. The Time magazine in 2014 listed him as one of the 100 most influential people in the world.

The IGNCA is holding a series of events to raise awareness about cleanliness to support the national Swachh Bharat Abhiyan. On Tuesday, Oct 4 there will be a painting competition for school students.
In a separate lecture on Wednesday, October 5, Dr Ram Autar will share the ideas of ‘Swacchta’ as described in ancient literature. A two-day cartoon workshop from Oct 6-7 will be led by Raipur-based artist Shri Triambak Sharma. The IGNCA is also hosting an exhibition by Sulabh International which is open to the public from 10am to 6pm until October 8.