#Tiger_Shroff, who is currently shooting for director Sabbir Khan's #Munna_Michael, has paid tribute to the late King of Pop Michael Jackson by replicating his moves in the film. And the first look of the movie shows the actor is trying to give his best shot to emulate MJ. 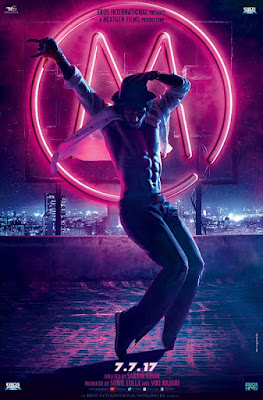 Tiger is seen wearing a hat and striking a pose similar to the signature Michael Jackson pose.

Three massive sets reflecting Mumbai's nightlife were created at a studio here for a special song, which will feature over 400 dancers and will be choreographed by Ganesh Acharya, read a statement.

The special song, which will be incorporating moves from some of Hollywood's finest background artistes, will open the film.

"Michael Jackson is the greatest and this entire film is dedicated to him. It's a new journey and I hope he's watching," Tiger said in a statement.

Director Sabbir said: "The song was recorded in Mumbai and sent to Los Angeles, where a team of American choreographers created dance videos, which our Bollywood team and Tiger have recreated here."

"We're keeping all the quintessential elements of Hindi cinema -- heroism, music, dance and action -- intact while trying to raise the bar".
Tiger will be imitating some of MJ's most iconic dance moves, including the `toe-stand', `crotch grab', `moonwalk', `feet shuffle', `MJ spin', `anti-gravity lean', `sideslide', 'robot' and `jacket throwback'.

Producer Viki Rajani said: "As we all know, Tiger is one of the best dancers in Bollywood and this movie will distance him for the others. He moves like magic and in 'Munna Michael', people are going to see some unbelievable moves from him. With this movie we are looking to leave a benchmark for dancing in Bollywood."