Entertainment network #Viacom18 joined hands with not-for profit organisation Mumbai First for the #Hamara_Station_Hamari_Shaan initiative on the occasion of #Gandhi_Jayanti on Sunday. 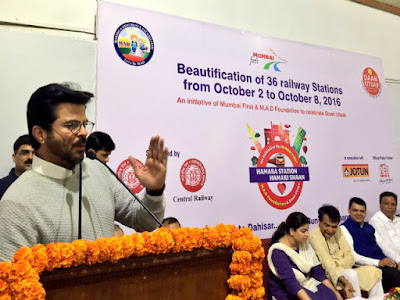 Speaking at the event, actor-producer Anil Kapoor said in a statement: "This is terrific. So many people, from all walks of life, coming together to make Mumbai's lifeline - our railway system - jhakkas! And what better time to kick off this collaborative effort to give back to society than during Daan Utsav on Gandhiji's birth anniversary."
This is part of Daan Utsav (formerly known as Joy of Giving Week), an annual festival, on the occasion of Gandhi's birth anniversary. It celebrates giving across India under which multiple organisations come together and donate to bring change in the lives of their fellow citizens. The festival is held from October 2 to 8 every year.

Under the ambit of Viacom18's flagship CSR programme Chakachak Mumbai, the company will support the beautifying of stations, with the help of volunteers throughout the week.

"As part of our Chakachak Mumbai campaign, an initiative in health and sanitation, we have extended our outreach to promotion of cleanliness at these important landmarks," added Sonia Huria, Head, Communications and CSR, Viacom18.