The first teaser poster for filmmaker #Sujoy_Ghosh's much awaited suspense thriller "#Kahaani_2" came out on Tuesday, and actress #Vidya_Balan is "most wanted" as her character Durga Rani Singh is charged with kidnapping and murder. 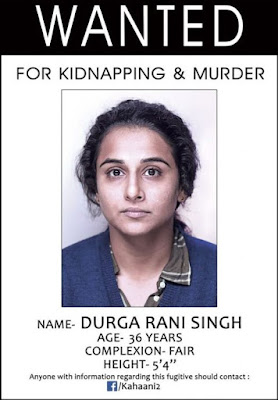 Vidya, who also featured in the 2012 film "Kahaani", will be essaying a 36-year-old woman wanted for kidnapping and murder in the second installment of the suspense thriller.

The teaser poster shows a photograph of "The Dirty Picture" star, who is sporting a de-glam look. The poster also reads: "Wanted for kidnapping and murder... Anyone with information regarding this fugitive should contact...."

"Kahaani 2" is jointly produced by Kushal Kantilal Gada, Dhaval Jayantilal Gada, Aksshay Jayantilal Gada and Sujoy Ghosh. The film, which is slated to hit the screens on December 2, also features Arjun Rampal in a key role.
To stay updated, visit InstaMag or connect with us on Facebook, Twitter and Pinterest.