Filmmaker #Omung_Kumar has praised the acting skills of former Miss World #Aishwarya_Rai_Bachchan, who turned 43 on Tuesday, and also said that she is a director's actor. 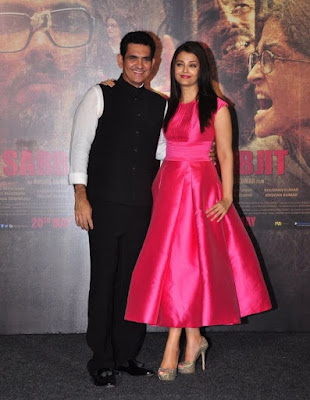 "She is a good actress...but she is a director's actor. So, she can mould herself completely for the character. When we decided to cast her as Dalbir Kaur for 'Sarbjit', she proved that and on screen, we saw her as a character and not as a glamorous diva," Kumar told.

After clinching the Miss World crown in 1994, Aishwarya starred in many hit films like "Hum Dil De Chuke Sanam", "Taal" and "Dhoom: 2".

Kumar said that "after the release of 'Sarbjit' (2016), people have changed their perception about her as an actress".

What makes her so special?

Kumar said: "Even after becoming such a huge star, she is extremely hard working and a hardcore professional. She does not just work in a film, she collaborates with the director of the film. She is very cooperative by nature, and that is why I share a very good bond with Aishwarya."
"During our shooting of 'Sarbjit', she didn't even use mobile phone on set. That's her dedication level. I wish her a very happy birthday and wish to see her growing as an artiste," he added.

Meanwhile, a source has shared that the Padma Shri awardee, who has a daughter with actor Abhishek Bachchan, will celebrate her birthday with family.