The second three-day National Children's Film Festival #NCFF organised by Children's Film Society of India #CFSI will open in the Pink City, Jaipur, from Children's Day, November 14, an official said here on Thursday. It is themed on 'Make In India'. 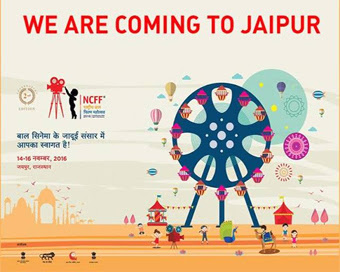 The inaugural event will be held at the Birla Auditorium in Jaipur with the screening of the film "Gauru", directed by Ram Choyal, featuring singer-actress Ila Arun in a lead role and set against the rural background of Rajasthan, said CFSI CEO Shravan Kumar.

Besides, around 40 films, including many award-winners like "Gopi Gawaiya Bagha Bajaiyaa", "Kima's Lode", "Budhia Singh - On The Run", and others will be screened in 10 cinema halls over the three festival days.

"Jaipur is a colourful city with a rich cultural background, dance, music, vibrant costumes, beautiful handicrafts are there which will add vivid panorama of children's films of all kinds from CFSI," said CFSI Chairperson Mukesh Khanna, popular among kids as Shaktimaan.
Shravan Kumar said that the CFSI's International Children's Film Festival has already become the largest of its kind in the world, and the NCFF was envisaged on similar lines for the domestic audiences.

"Nurturing creativity and exposing children from across India to a value-based entertainment through CFSI films was the through behing conceiving the NCFF," Kumar pointed out.

Several Bollywood celebrities working towards the cause of children's cinema are expected to join the festival, themed around 'Make In India' with workshops on animation, script-writing, filmmaking, dance and theatre with a special focus on Little Directors.

Set up in 1955, the Mumbai-based CFSI produces high quality children's films and television programmes in 15 Indian languages, besides organising special screenings to around four million children across India every year.