The Odisha government has accorded an in-principle approval to Gitanjali Gems Ltd. for setting up a gems and jewellery industrial park at Ramdaspur in Cuttack district. 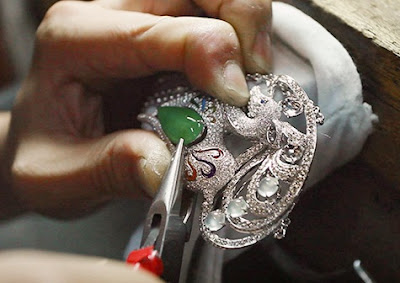 The total investment envisaged in this private industrial park spread over 100 acres is Rs 685 crore over seven years, said an official on Thursday.

The in-principle approval for the establishment of the park was given at the state-level committee meeting held under the chairmanship of Chief Secretary Aditya Prasad Padhi.

The committee decided to advise the project proponent to submit a Detail Project Report (DPR) within six months for consideration of final approval.
The proposed components in the park include precious and semi-precious diamond cutting, diamond polishing, designing and manufacturing of gold, silver, platinum and diamond jewelleries, manufacturing of fashion jewellery, manufacturing of life style products, retail centres and export houses.

The company proposed to bring in its associates and promoters like Asmi, Nakshatra, GILI, Sangini, Nirvana, Kairana, Valente, Viola to the park, said a release.

The project envisages creating jobs for around 16,000 people in three different phases of which 4,000 would be engaged in the first phase, the release added.

The expenditure for development of infrastructure has been estimated at Rs 129.5 crore in three different phases including the common facility centres.

In February 2016, Gitanjali gems had proposed setting up a gems and jewellery processing unit during discussions with the state delegation during 'Make in India' week in Mumbai .