Actor #Salman_Khan has heaped praise on #Aamir_Khan's latest release #Dangal, a biographical wrestling drama which hit the screens worldwide on Friday, calling it a much better film than his own release "Sultan". 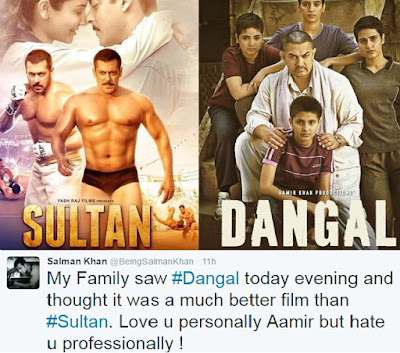 In Ali Abbas Zaffar's "Sultan", which released earlier this year, Salman played a wrestling champion from Haryana whose successful career wreaks havoc in his personal life.

"My family saw 'Dangal' and thought it was a much better film than 'Sultan'. Love you personally Aamir but hate you professionally," wrote Salman on his Twitter page on Friday.

Aamir responded to his tweet by saying: "Salman Khan, in your 'hate' I feel only love. 'I love you like I hate you'."

Directed by Nitesh Tiwari, and based on an incredible true story, "Dangal" chronicles the highly inspiring and empowering journey of a father who trains his daughters in wrestling.
In the film, Aamir plays Mahavir Singh Phogat, a former national champion who, much to the disapproval of his wife and his whole village, trained his daughters Geeta and Babita to wrestle.

"Dangal" has been dubbed in Tamil and Telugu.