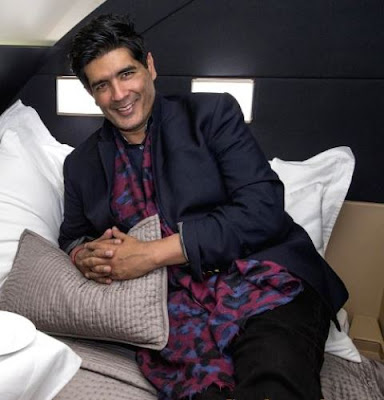 The fashion show was filmed at the Lakme Fashion Week, sponsored by Etihad Airways, last year in August but the virtual reality - a computer generated simulation of a three dimensional image or environment that can be interacted with in a seemingly real or a physical way but a person using a special electronic equipment - version was officially launched on Thursday here.

More like a 360 degree view, the VR show was clearer, and a close view of the creations, the ramp and the models that Malhotra had on the show.

The showstoppers that the eight-minute long video had were Bollywood actors Sushant Singh Rajput and Shraddha Kapoor.

While Sushant was clad in black bandhgala and a white Jodhpuri pant, Shraddha was in a resplendent deep green velvet lehenga paired with an embroiderd crop blouse.
"Virtual reality is definitely the next thing for the future. For people who are not there at the fashion week or for the show... For them to feel that they are a part of it, it's a good platform," Malhotra, who has dressed celebrities like Aishwarya Rai Bachchan, Priyanka Chopra, Kareena Kapoor Khan, Shah Rukh Khan, Kajol and Reese Witherspoon, told here.

Malhotra will shortly unviel his plans on how his show on the VR will be showcased but Etihad Airways will be showcasing it on their in-flight entertainment systems soon.

Talking about his collaboration with Etihad Airways, Malhotra says that since he has travelled with the airlines and enjoyed his journey too, the idea of collaborating with them was something he was game for.

"When Etihad Airways came to me with the idea, I thought it something I could definitely do. Secondly, it was for Lakme which is homeground... so it was double enjoyment.

He says that collaboration has been extremely successful, the "collection is successful and the menswear line has done very well".

With the brand officials giving Malhotra and few journalists a tour of the Innovation Centre, the visit also covered a tour of the cabin crew training facilities.

The Innovation Centre had mock-ups of some of Etihad's premium cabins, including their three room suite - The Residence.

With mostly colours like white, brown, black , the cabins shown were made in details including the Arabic designs incorporated in the aisles and roofs of the bar.

Luxurious indeed, the cabins were space smart with storage space intelligently designed and the linen used were plush.

Patrick Pierce, Vice President Sponsorships at Etihad Airways, said: "As the international fashion industry prepares for its first major event of the year with another edition of Lakme Fashion Week in Mumbai next month, we were delighted to host Manish Malhotra in Abu Dhabi."

Jaspreet Chandok, who is the Head of Fashion, IMG Reliance, a global entertainment conglomerate which has collaborated with Etihad Airways for sponsoring fashion week events around the world in a multiyear deal, says that the conglomerate is "happy to have" Malhotra on board as he is seen as a part of Lakme Fashion Week.

"We are delighted to have Etihad Airways host the launch of the Manish Malhotra virtual reality show at their Innovation Centre".