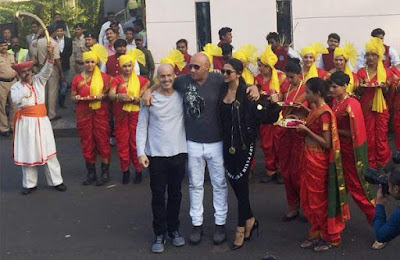 The American actor was accompanied by co-star and Indian actress Deepika Padukone and Director DJ Caruso.

They arrived to the typical desi fanfare of women dressed in red saris and yellow turbans. Diesel looked excited as he waved out to the media and to the crowd there with much gusto.

Dressed in white jeans, a black t-shirt and a pair of shades, he walked out of the airport here hand-in-hand with Deepika, who sported an all-black look complete with black stilettos.

They flashed their smiles and looked around at the mania which made up for the grand reception they received here with the 'band, baaja'.

He has a packed itinerary full of fan interactions, a glitzy red carpet gala and a star-studded premiere.

According to sources, plans are in place to give Diesel a "splendid taste of India" -- and the start has been in tune with that.

The actors, along with other members of the film's cast and crew, have been on an extensive worldwide promotional spree to promote the film. They visited London and Mexico before coming to India.