Singer #Lady_Gaga collaborated with heavy metal band #Metallica to give a rocking performance at the 59th annual Grammy Awards on Sunday. Despite a technical glitch, their gig received loud applause from the audience. 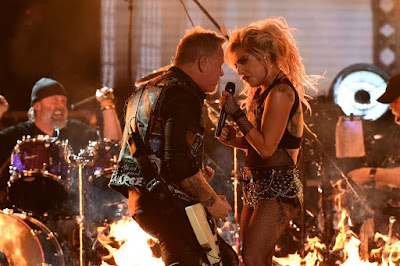 The performance was soon interrupted when Metallica's James Hetfield's microphone stopped working. However, it didn't stop Gaga as she shared her microphone with him.

Gaga, who is receiving rave reviews for her new album "Joanne", was not nominated in any of the categories in 2017.

In addition to Gaga and Metallica, the 2017 Grammys also saw performances from Adele, Bruno Mars, Lukas Graham among others.
Hosted by James Corden, the award show, honouring the best of music around the world, took place at the Staples Centre here.