Filmmaker S.S. Rajamouli, busy with the production of his much-awaited "Baahubali: The Conclusion", says the first part of the movie was just a starter. 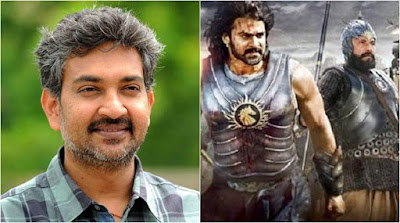 In a tete-a-tete with film critic Anupama Chopra for digital platform Film Companion, Rajamouli opened up about the scale of "Baahubali: The Conclusion", about the journey with the epic historical fiction franchise, his life as a director and his future plan.

What to expect from the second part of "Baahubali"?

"First part is introduction of characters, we haven't really gotten into the plot. The characters are established and we've given all a hookline. The first part was starters and the second part is the actual meal," said Rajamouli, who dabbles in Telugu language movies.

The National Award winning director has spent five years with the franchise.
"To most in the external, it may feel like one thing that I'm focusing all my energy on, but internally it's a lot of things -- so many elements, so many branches. We are really enjoying it every step of the way.

"Now we are all raring to go to work with the other things connected to 'Baahubali' -- the novels, animated series... Overall, the process feels very different and unique," he said.

Known for movies like "Magadheera" and "Eega", Rajamouli says he's a "great storyteller but not a great director".

"When I start telling a story, I feel very confident. I'm not as confident when directing. I have so many doubts running through my mind. So, I'm not very sure footed about what I'm doing and hence I keep going back and forth.

"But when I'm telling a story, I know I'm telling it right and I'm sure I'm capturing my listeners' interest," the Padma Shri awardee told Chopra.

Rajamouli also said he screams a lot on sets,

"Even small things irritate me. But I also let the few mistakes pass. I am human on the sets," he quipped.

Will he consider doing small films after such massive projects?

"It's not like I only want to make big films. It's the nature of subject that makes the film big or small. Each subject drives its own path. Based on the subject you know who to cast, the budget, the crew, the economics.

"It's all subject-driven and not the other way round. I'm happy to do this big film since I wanted to do one for a long time. However, I'm ready to do small films as long as the subject excites me."

He feels younger filmmakers need to understand the value of patience and hard work. But he finds them good at multi-tasking.

"They need to strike the balance between the two. If you keep waiting patiently, the chance may never come. Hence, you should know how and when to wait. You should always be honest to yourself as a storyteller. Chose any path and genre you want. You shouldn't let your storytelling be affected by what others are telling you," he said.