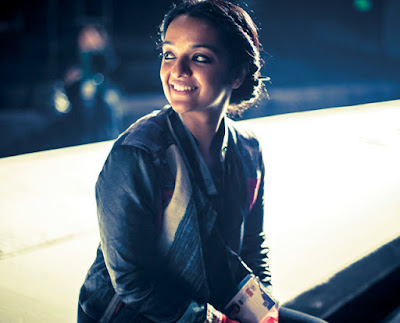 With museum's rustic background of huts and thatched roofs, the audience was in for a treat.

Hues of blue, black, yellow, green were showcased by the designer in coats, tunics, jackets, trousers, skirts and dresses.

Accessories like pom-poms played a major role, turning a simple attire into a vibrant party wear.

While the musicians played the saxophone, drums and other musical instruments, beatboxing by one of the artistes stood out.

The models walking around a tree seemed to have fun, skipping and jiving to the foot-tapping music.

Perfect lighting and an off-beat venue is something we would expect for a fashion week's finale but this show by Arora's brand Pero definitely took the limelight.
"For fall-winter 2017, I decided to open my travel journals and revisit all those places that I had travelled to and recorded/documented all my memories and everything that inspired me," Arora said here on Thursday.

"Somehow I had forgotten the amount of joy that was enclosed in those journals. There was enough inspiration for this season and many more," she added.

Talking about the collection, mix of elements from China and Latin America (Peru, Mexico and Guatemala) had been incorporated.

The collection had many overlaps in the clothing traditions of these places; "in terms of neon accents that people in these places use to add colour to their indigo clothing".

"In China, the accents are added through colourful geometric embroideries, tassels and pom-poms, whereas in Latin America, it is done through bold floral embroideries. To my surprise, similar floral embroideries were also seen on the skirts of a few Chinese minorities," she said.

Entering from all corners, the models flaunted dreadlocks with colourful bags with pom-pom balls stitched on them.

The four-day long fashion extravaganza is being held at Jawaharlal Nehru Stadium and will end on Saturday.