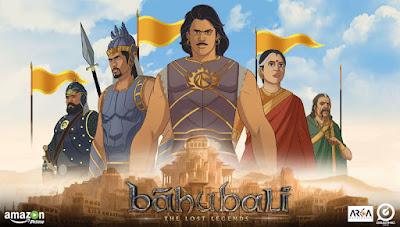 "Baahubali: The Lost Legends" is made by Rajamouli in association with Graphic India and Arka Mediaworks and viewers can now watch the first episode of the animation series. The other episodes will be released from May 19 onwards.
"What we managed to showcase in the films was just the tip of the iceberg. From the minute I started working on this story, I knew the world of ‘Baahubali' can't be encompassed into a film or two, simply because there's so much more to tell and animation is another way to do that," Rajamouli said in a statement.

"We are happy to be collaborating with Graphic India and Amazon to bring the ‘Lost Legends' to audiences through Amazon Prime Video," he added.

The launch of the animation series comes before the release of "Baahubali 2: The Conclusion" on April 28. The film features Prabhas, Anushka Shetty, =Rana Daggubati and Tamannaah in the lead.

"Baahubali: The Lost Legends" is set before the Kalakeya invasion depicted in the movie, when Baahubali and Bhallaladeva are still both young princes of fictional place Mahishmati.

The animated series features new stories about the characters from the film, including Baahubali, Bhallaladeva, Kattapa and Sivagami as well as dozens of new characters that will expand the world of "Baahubali" and reveal hidden secrets for millions of fans.

"We are really not thinking about competition and are mainly looking forwards to great content. We are happy to expand the ‘Baahubali' franchise through the animation series ‘Baahubali: The Lost Legends'," said Nitesh Kripalani, Director and Country Head, Amazon Prime Video India.

Priced at Rs 3,999 (including taxes), the media stick will be available on Amazon.in and select retail stores, including Reliance Digital and Croma across India.
Entertainment