Filmmaker S.S. Rajamoulis magnum opus #Baahubali2TheConclusion has stormed its way into the theatres pan India and across the world with fans rejoicing the moment they have been waiting for since the last 21 months after the release of "Baahubali: The Beginning". 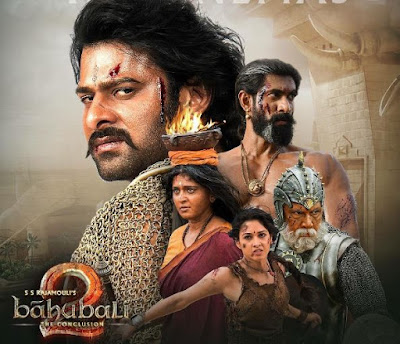 With its release in over 6500 screens in India and over 9000 screens across the world -- the highest for an Indian film till date -- "Baahubali 2: The Conclusion" is expected to set new highs in terms of box office collections, say trade pundits and theatre chain owners.

"The film is receiving a tremendous response pan India. It has stormed into theatres. Despite being a southern film, it is going houseful in various theatres in north India. On an average, the film has received 80-90 per cent seat occupancy till now," Delhi-based distributor Joginder Mahajan told.

Kamal Gianchandani, CEO, PVR Pictures said that they are expecting a seat occupancy of 85 per cent on the opening day.

"PVR has allocated close to 80 per cent of its total capacity to ‘Baahubali 2: The Conclusion' in India. The film has taken a phenomenal start, the occupancy is expected to be 85 per cent for day one," Gianchandani said in a statement.
The film, released in Hindi, Tamil, Telugu and Malayalam, features Prabhas, Anushka Shetty, Rana Daggubati and Tamannaah in the lead.

In various cities of Andhra Pradesh and Telangana, the film is sold out for the next one week, trade analyst Anand Vanga told.

"It's not just the weekend. Tickets for the entire first week have been sold out across major multiplexes in Hyderabad and other big cities in Andhra Pradesh and Telangana. The film will rewrite box office records and set a new benchmark for the industry," Vanga said.

One reason behind such a craze for the film is the response that "Baahubali: The Beginning" got when it released in July 2015. The film minted over Rs 600 crore and left fans amazed with one question - why did Kattappa kill Baahubali?

Ashish Saksena, COO-Cinemas, BookMyShow said "Baahubali 2: The Conclusion" has chances of entering the Rs 100 crore club on the opening day itself.

"We have witnessed unprecedented advance ticket bookings as fans bought as many as 12 tickets per second. The movie has clearly broken all language barriers and has reaffirmed that the audience loves to watch good content," Saksena said.

In Tamil Nadu, "Baahubali 2: The Conclusion" opened across nearly 650 screens.

Despite early morning shows of the film being cancelled in the state, the film had a phenomenal start at the ticket window.

Abirami Ramanathan, President of Chennai Theatre Owners Association, said the film has sold tickets worth over Rs 4 crore in Chennai.

"The film has opened very well. We have released the film in 58 screens in the city. In the first four days, tickets worth Rs 4.5 crore have been sold. Such unprecedented craze has never been witnessed before for any film in the city," Ramanathan told.

He went on to add that he sold 35,000 tickets in his Abirami multiplex in advance bookings.

Joginder Mahajan pointed out that the film is doing well in both multiplexes and single screens.

"Both multiplex and single screen owners are rejoicing this moment. The film is reviving the single screens, which have been waiting for something like this since a long time. If it goes like this, then ‘Baahubali 2: The Conclusion' will have a lifetime collection of over Rs 800 crore," Mahajan said.

"Baahubali 2: The Conclusion" will not have any competition in theatres for the next two weeks.
Entertainment