Actor-producer #Tom_Cruise is seen swinging back and forth in the air using a harness and crashing his car into a tree in the videos shot during the filming of the upcoming movie #MissionImpossible6. 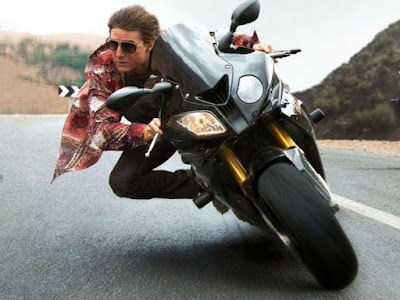 In one of the videos, the 54-year-old actor is watched by a lot of excited onlookers on the filming set.

He looks impressively relaxed when the crew sends him flying to the air. The crew lets him swinging back and forth on the harness before bringing him back to earth.

Another video offers a brief look at Cruise who drives a car and pulls off a 180-degree turn before crashing it into a tree.

Meanwhile, the set photos feature Cruise filming a motorcycle scene. He wears all-black suit in the photos, driving a motorcycle amid crowded street.
A few days ago, photos of Cruise on "Mission: Impossible 6" filming set in Paris also surfaced online.

Cruise will reprise his role as Ethan Hunt in the sixth instalment of the "Mission: Impossible" movie series.