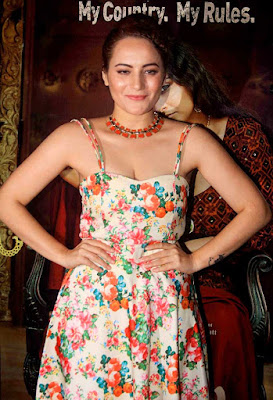 Raviza, who comes from an Army background, got her first acting break as a sex worker in Ali's short film "India Tomorrow".

"After being appreciated by Mukesh Chhabra in the NDTV's show 'Ticket to Bollywood', the next day I got a call from him saying Imtiaz Ali wants to meet me. Then Imtiaz gave me a few lines and I was sitting with him in his car."

"Within a day, I was in for the project. Working with a director like Imtiaz Ali for my first break was very surreal for me," Raviza said in an interview on Saturday.

"Working with him gave me a lot of confidence as an actor and it taught me a lot as far as my craft of filmmaking is concerned," she added.

"When Mukesh showed my short film to Srijit during selection for 'Begum Jaan', I was selected immediately without much effort," she said.

Talking about working with actress Vidya Balan in the film, Raviza said, "Working with Vidya was very special. This is my first film and working with Vidya in my first movie... was a privilege for me as an actor."
"Vidya is not just an amazing and a powerful actress, but at the same time she is so humble and sweet that I connected with her on a different level altogether."

In the film, the budding actress plays Lata.

"She is a Rajasthani widow who ends up working in Begum Jaan's brothel. It is the gritty story of sex workers set in the Independence era who fight for their own rights," Raviza said.

Her thoughts on nepotism in the film industry?

She said: "Nepotism does exist in the industry, but as an actor you can't crib about it all the time. If an actor really knows how to act and is versatile enough, then nobody can throw them out..."

"Begum Jaan" has Vidya playing the lead character of a brothel house owner. It is the Hindi remake of the 2015 Bengali film "Rajkahini".