Bollywood actress #Alia_Bhatt, who was awarded the #LokmatMaharashtrianoftheYearAward on Tuesday, says that she did not feel bad for not winning the #NationalAward for Best Actress this year. 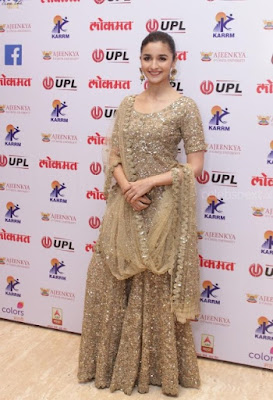 Alia's performance in "Udta Punjab" was received well by critics and audiences alike. At the media interaction after the awards, reporters expressed their sympathy for Alia not getting a National Award.

"Please don't feel bad. I am not going anywhere. There is lot of time. I did not feel bad so even you don't feel bad about it," the "Student of the Year" actress said.

Expressing her joy on winning the Lokmat Award, Alia said, "It's a great moment. Winning this award shows that you are now in the heart line of your country. So it's great."

Alia was last seen in "Badrinath Ki Dulhania", a romantic comedy film directed by Shashank Khaitan and produced by her mentor Karan Johar.

Asked when she would start working for her next film "Dragon", she said: "Ranbir is here, I will ask him when he will finish his shooting for 'Dutt' so that we can start the film, I will go and ask for the dates."
"Dragon", a superhero film, will see Alia and Ranbir together on screen for the first time. Written and directed by Ayan Mukherji and produced by Karan Johar, it also stars Amitabh Bachchan.
Celebrity , Entertainment