A moving video of veteran actress #Saira_Banu trying to urge her ailing husband, the legendary actor #Dilip_Kumar to react, is among the first updates to be shared on his official Facebook account. 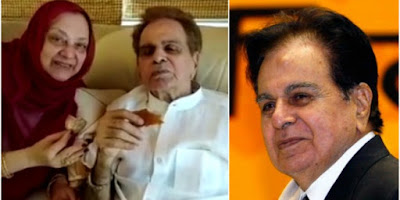 The 94-year-old has been suffering back pain, and has a biscuit in his hand during the 33-second long video. It features Saira trying to make Dilip Kumar talk and asks how the biscuit tastes. He, meanwhile, chews on the biscuit with his eyes closed. The emotional video featuring Bollywood's 'king of tragedy', ends with Saira planting a kiss on her husband's cheek.
It is captioned: "Irritating pain in lower back. A refreshing cup of tea is always welcome."

In the frame is a trolley with a cup of tea.

Just a day earlier, the thespian was felicitated with a Living Legend Lifetime Award from the Punjab Association at his residence here. Some photographs were shared. On his health, a post reads that he is "better" except for "slight discomfort" due to back pain.

Last seen on the big screen in "Qila" in 1998, the actor was honoured with the Dadasaheb Phalke Award in 1994 and the Padma Vibhushan in 2015.