Actress #Parineeti_Chopra on Tuesday termed #Ayushmann_Khurrana, her co-star in the upcoming flick, an "innocent guy". 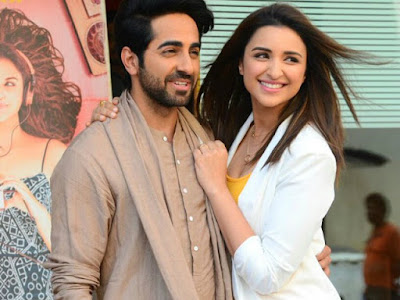 "Ayushmann is a very innocent guy, you won't get any spicy stories from him," said Parineeti, who was promoting and launching a song from "Meri Pyaari Bindu" with Ayushmann.

"Ye Jawani Teri" is a peppy song which is sung by Nakash Aziz and Jonita Gandhi. The song gives us a throwback to our college days and we see Ayushmann and Parineeti grooving like never before.

Parineeti did her singing debut in "Meri Pyaari Bindu" with "Mana Ke Hum Yaar Nahi". The Song received positive response from the audience.

Parineeti Chopra was last seen in the film "Kill Dil" along with Ranveer Singh, Ali Zaffar and Govinda.

"Meri Pyaari Bindu" marks Parineeti's comeback after almost two years. It is a romantic flick, which is directed by Akshay Roy.
Celebrity , Entertainment