Actors #ZoeSaldana and #DaveBautista sent out a special message to all the fans of their film franchise #GuardiansoftheGalaxy in India. 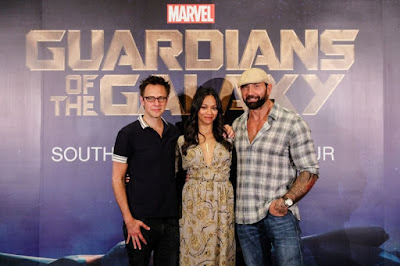 The actors said the team came up with the idea of a ‘desi' version of the trailer as a special gift to the Indian fans.

In the video, the actors are saying: "Namaste India, I'm Dave Bautista and I'm Zoe Saldana and here's something special from the Guardians of the Galaxy, just for you. Obviously!"

"Guardians of the Galaxy Vol. 2" is written and directed by James Gunn, and stars Chris Pratt, Saldana and Bautista. It also features the voices of actors like Vin Diesel and Bradley Cooper.
It is releasing on May 5 in India, in English, Hindi, Tamil and Telugu.

With the backdrop - 'Awesome Mixtape #2', the second part of the 2014 film "Guardians of the Galaxy" will take further the team's adventures as they traverse different cosmos to protect their world.

This time, the storyline will explore family values and also unravel many family truths and mysteries.
Celebrity , Entertainment