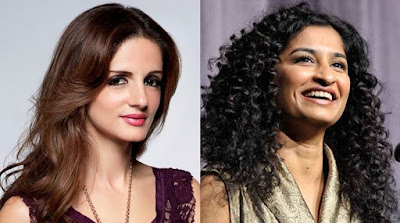 "I am the third child of my parents and while growing up I know that I was lucky as my parents brought me up like a boy. There was no difference between me and my brothers. That is one lesson I learnt very young that children should always be treated equal," Sussanne, who is former wife of actor Hrithik Roshan, said on the stage.
She was given the honour for her successful career as an entrepreneur and interior designer.

"I have always had the opportunity to dream big and beyond the limits of a third child. I was lucky that my parents could afford to send me abroad for education," she added.

Shinde, an ad-film and feature film director known for films like "English Vinglish" and "Dear Zindagi", was not able to attend the event due to personal problems.

"I want to thank YFLO for considering me worthy for this award. The society has to move forward. I think women have to certainly lead the way. We don't have much choices. Together we can achieve anything," Shinde said in a video.

The biggest highlight of the evening was the fashion show by Sabyasachi wherein he showcased some of his indigenous costumes, especially designed using various weaving methods from across India.

The show, which focused around promoting the Indian textile industry, showcased women -- mostly around the age of 50 and more -- walking the ramp while donning saris, lehenga choli and salwar kameez in various colours.

"My brand works with some of the most important and iconic textile and craft leaders in India... This show is a reflection of that vision," Sabyasachi said.

Smriti Irani, who was chief guest at the event, said: "I want to compliment all the women, who have faced struggles in their lives, and still have a smile on their faces. Also I want to compliment Sabyasachi for the first time using textile in a real event."

"When we talk about empowerment, I don't know why is it that the word empowerment is always used in conjunction with women because it's the men who need help and not us," she added.

Another interesting segment of the night was when Paralympian Deepa Malik took the centre stage to thank her mother and her sister-in-law for standing by her side and motivating her. Her speech was applauded by the audience with a standing ovation.
Celebrity , Fashion & Lifestyle