Dispelling rumours of any bad blood between them, Bengali cine star and National Award winner #Rituparna_Sengupta, who essayed Begum Jaan in Srijit Mukherji's "Rajkahini", met and even posed sportingly with her Bollywood counterpart #Vidya_Balan who portrays the same role in the eponymous Hindi adaptation #Begum_Jaan. 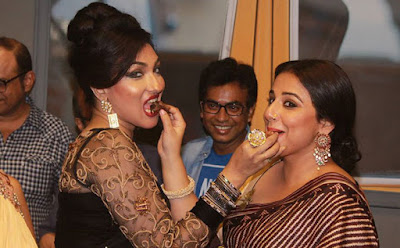 "I am very happy that I am doing the adaptation of 'Rajkahini'. I am very happy to be part of Srijit's first Hindi film. You have given so much of love to 'Rajkahini'. Of course, it is a very good film. I want you all to love 'Begum Jaan' as well," Vidya said here at a late night event on Monday.

During the meet, Bengali actress Priyanka Sarkar, who had starred in the Bengali outing, posed for photographs with Bollywood actress Gauahar Khan, who stars in the Hindi adaptation.

"One story, different languages... Same soul, many bodies... Divine love, diverse expressions... This is to the spirit of 'Begum Jaan'," Sarkar tweeted.
Bengali film industry's powerhouse performer, Rituparna Sengupta's hard-hitting performance as a madam of a brothel resonated well with critics and audiences alike in "Rajkahini". It released in October 2015, made it to 19 film festivals and was a commercial hit.

Contradictory reports of who was Mukherji's original choice for the title role had recently fuelled a controversy of bad blood between the two leading ladies.

The film sees Vidya play a brothel owner in a story of survival set against the backdrop of the country's Partition in 1947.

"Rajkahini" dealt with the aftermath of partition of Bengal as part of Partition of India in 1947.
Celebrity , Entertainment