Renowned Sarod players #Amaan_Ali_Bangash and #Ayaan_Ali_Bangash believe that the world's biggest video-sharing platform #YouTube has changed the world of music once and for all. 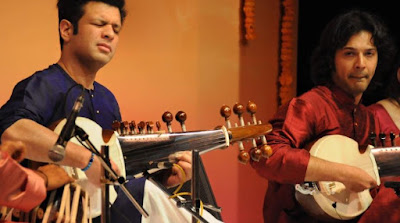 "It's the time of social media. It's good to listen to so much material. The content is easily available there (Youtube). Back in the day, one just had to run to look for even for a single record, one CD or cassettes of your favourite musicians. Whereas, now everything is available quite easily," said Ayaan, who along with his elder brother Amaan visited Noida for the first time for a 'True to our roots' concert organised by HCL.

While maintaining that YouTube has made the world of music more connected than ever before, the Bangash brothers, whose mesmerising performances can be watched on their official channel 'Sarod Records', pointed out its disadvantages too.
"It has, perhaps, given a platform to lot of opinions, views, which are posted by an unknown identity...I can't say how healthy it is. However, as fas as music is concerned, especially, if you are professionally learning a particular form of art, one needs to have proper guidance from a trainer, a guru to know what direction he/she should take," exclaimed the duo, who enthralled audience playing melodious ragas including their favourite 'Raga Rageshree' during the concert that concluded Sunday night.

In tete-a-tete, the duo revealed they are working with western musicians for fresh records, scheduled to be released soon.

"We are working with musicians from western school of music. It will be an interpretation of western classical music in Indian form. Besides, we are also working with Karsh Kale (Indian American musician). With Karsh, we will be working on a musical mix of electronica and Indian classical music, disclosed Amaan, who is planning to get hitched in near future.

The musical greats also talked about their latest album 'The Journey: Rabab to Sarod'.
"When we recorded a track with Afghan Rabab player Daud Khan Sadozai, we didn't plan to make an album. We just wanted to check how Rabab sounds with Sarod. It sounded amazing...It was Ayaan's idea. It took us a year-and-a-half to decide to come out with an album," the musical duo signed off with a smile.
Entertainment , Fashion & Lifestyle