At least 19 persons were killed and 59 injured in a #terror_attack here on Monday night at the conclusion of a concert by American pop singer #Ariana_Grande, police said. 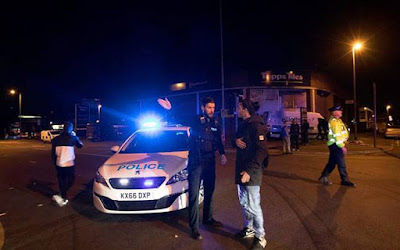 The explosion, the second in the city in 21 years, took place around 10.35 p.m. (local time) on Monday at the Manchester Arena where around 20,000 fans, mostly youngsters, had gathered.

The fans were streaming out of the arena, shortly after Grande had left the stage, as the explosion occurred.

At least 60 ambulances attended the scene of the blast, the UK North West Ambulance Service tweeted. The Manchester Royal Infirmary Hospital was blocked off to all but essential staff after the attack.
No group or individual has so far claimed responsibility for the attack, but supporters of the Islamic State (IS) terror group were seen celebrating the blast on social media, the British media reported.

The blast shook the arena building even as fans were trying to flee, CNN reported, quoting a US official as saying a suicide bombing, most probably carried out by a male, caused the blast.

According to a witness, the sound of wailing sirens soon cut through the smoky air outside the venue.

Calvin Welsford, an 18-year-old concertgoer, said he heard a "loud bang" a couple of minutes after Grande's set had finished.

She will chair a meeting of the government's emergency Cobra committee at 9 a.m. (local time) on Tuesday.

"We are working to establish the full details of what is being treated by the police as an appalling terrorist attack. All our thoughts are with the victims and the families of those who have been affected," she said.

Labour Party leader Jeremy Corbyn tweeted: "Terrible incident in Manchester. My thoughts are with all those affected and our brilliant emergency services."

Indian Prime Minister Narendra Modi, condemning the attack said "our thoughts are with the families of the deceased and prayers with the injured".

The US Department of Homeland Security said it was "closely monitoring" the situation.

It, however, said the department had "no information to indicate a 'specific credible threat involving music venues in the US'."

Manchester Police Chief Constable Ian Hopkins told the media: "This is clearly a very concerning time for everyone. We are doing all that we can and are working with local and national agencies."

Hopkins advised people to stay away from the Manchester Arena while investigations continued.

Scottish First Minister Nicola Sturgeon, condemning the attack, said she would convene the Scottish government's Resilience Committee on Tuesday morning to "consider any implications for Scotland".

The Scottish National Party announced that it will suspend a planned manifesto launch scheduled for Tuesday.

Grande, who had just finished the first of three scheduled UK performances when the blast hit, was not injured, a team member confirmed.

She tweeted several hours later: "Broken. From the bottom of my heart, I am so so sorry. I don't have words."

Hotels and homes in Manchester opened their doors to people who could not get home due to an area lockdown. Within an hour of reports of the blast, people began offering spare rooms and beds to people stranded in the city using the hashtag #RoomForManchester.

Taxis and local people offered free rides to those affected.

Social media posts from the scene showed panicked concertgoers running down the arena's stairs in an attempt to get away.

Charlotte Campbell told CNN that her 15-year-old daughter Olivia had not been in contact since the explosion.

"We've tried everything we can. They're telling us to wait by the phones. Her dad is out looking. It's the most horrible feeling ever, to know your daughter is there and you don't know whether she's dead or alive," she said.

Eyewitness Karen Ford had taken her 13-year-old daughter to the concert.

"It was mayhem on the street, there were children crying, trying to get in touch with parents, parents on their phones trying to contact their kids," she said.

"I brought my baby home, which some people won't be (able to do) tonight."

Universal Music Group, the parent company of Grande's Republic Records label, posted on Facebook: "We are deeply saddened to learn of tonight's (Monday night) devastating event in Manchester. Our thoughts and prayers are with all those affected by this tragedy."

"My heart hurts for my sister, Ariana and every family affected by this tragic event in the UK. Innocent lives lost. I'm so sorry to hear this," Nicki Minaj tweeted.

The Manchester Victoria train station located close to the Arena was shut down on Tuesday, UK National Rail announced.

Leader of Manchester City Council Richard Leese said the city was "proud, strong and we will not allow terrorists who seek to sow fear and division to achieve their aims".

The Monday night explosion was not the first in Manchester. In June 1996, an Irish Republic Army (IRA) truck-bomb exploded not far from the Arena that left hundreds injured.
Entertainment , Fashion & Lifestyle