Filmmaker S.S. Rajamouli's magnum opus #Baahubali2TheConclusion has upped the bar for box office earnings for Indian films by amassing Rs 400 crore plus worldwide in its opening weekend since its release on April 28, according to trade experts. 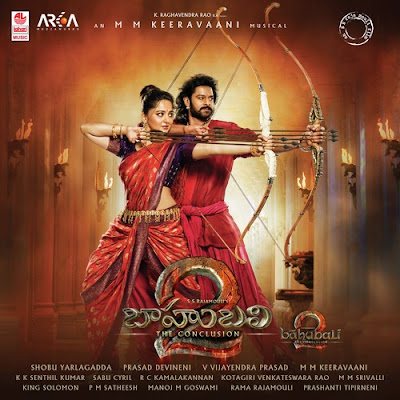 The second part in the "Baahubali" franchise -- a fantasy drama about a fictional kingdom -- has rewritten box office records, and how.

After zooming past the Rs 100 crore mark on its first day of hitting screens in India, the much-awaited movie which piqued the interest of viewers with the question 'Why did Kattappa kill Baahubali?', has kept the audience coming in to find out the answer.

The film, featuring Prabhas, Anushka Shetty, Rana Daggubati and Tamannaah in the lead, released in Hindi, Tamil, Telugu and Malayalam in over 6500 screens across India, and in 9000 plus screens worldwide.

Adarsh pointed out how the opening weekend figures of the Hindi version of "Baahubali 2: The Conclusion" had surpassed Bollywood biggies such as Salman Khan's "Sultan" and Aamir Khan's "Dangal".

Down south, the response has been tremendous.

In Telugu states, Telangana and Andhra Pradesh, the earnings are estimated to be beyond Rs 100 crore.

"Going by estimates, the film could have easily grossed over Rs 100 crore from Telangana and Andhra. It has already broken every record of all other big Telugu films," trade analyst Anand Vanga told IANS.

Trinath, another trade analyst, said there's no stopping the film at the box office.

"With no competition, the film is making a killing at the ticket window. It could be the first Telugu film to even gross over Rs 200 crore only from Telangana and Andhra. For the next two weeks, the film will have an uninterrupted run at the cinemas," he said.

In Tamil Nadu, where the film released in nearly 650 screens, it is estimated that the film might have grossed over Rs 30 crore in its opening weekend.

"Sources from within the industry say that the film could have raked in over Rs 30 crore in the state.

"If the early morning shows on April 28 were not cancelled, it could have easily minted another Rs 5 crore," Trinath said, citing a financial dispute between the producers of the film and its Tamil Nadu distributor.

In Kerala, according to the film's distributor Global United Media, the film has reportedly grossed over Rs 20 crore in the first three days.

In the US, the film was released via Great India Films, who said in a statement that the film has minted $10.49 million (Rs 68 crore).

Released in over 1100 screens in the US, the film made it to 40 IMAX screens, the highest ever for an Indian film.

From other parts of the world, the film is said to have collected Rs 71 crore in its first three days, trade gurus said.

If the social media buzz and unconfirmed reports are anything to go by, even before its theatrical release, "Baahubali 2: The Conclusion" had reportedly earned close to Rs 500 crore from television rights and territory-wise distribution within the country.

In Tamil Nadu, the film was sold for Rs 47 crore, according to industry insiders, while theatrical rights to the movie in Kerala and Karnataka are said to have been sold for Rs 10 crore and Rs 45 crore respectively. However, there is no official confirmation on these numbers.
Entertainment