'Baahubali 2' has not set any record yet: Anil Sharma

Director Anil Sharma says the much talked about film #Baahubali2TheConclusion has not set any record yet. 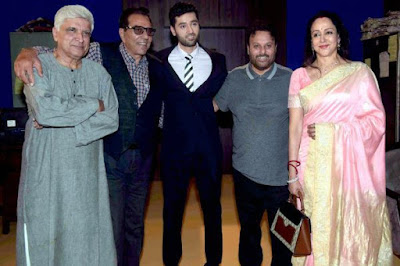 Sharma, who was present at the grand mahurat ceremony of his son Utkarsh's debut film "Genius", said this while interacting with the media persons.

Sharma, who has given many hit films like "Gadar: Ek Prem Katha", "Apne" and many more, was asked about the new records like Rs 1,000 crore being set by "Bahubali 2". To this, the director said: "It is just a matter of time. There was a a time when, in 2001, 'Gadar : Ek Prem Katha' was released and had done a business of 265 crore, which as per today's calculation is Rs 5,000 crore."
On being asked the same question again and again, the director said: "Please don't frame me in all these things. If some good film comes, records would be broken. And as far as 'Bahubali 2' is concerned, it has not yet set any record."

The proud father was also seen talking about the nervousness and preparation of his son's debut film "Genius".

"The script of the film did not let us sleep for two years. We all were nervous thinking about how it will shape up. But finally when the script was ready, all nervousness just ended," said Anil Sharma.

"Utkarsh's debut film is 'Gadar' (as a child artiste) and he was very confident in his first film itself. People have seen his performance in 'Gadar' so they have lots of expectations from him and even Utkarsh has a big responsibility on him. Let's see what happens," said Anil.

Actor Dharmendra and his wife Hema Malini were also present on the occasion and they wished all the luck to the newbie.
Celebrity , Entertainment