After hoping that India doesn't wreck a remake of his iconic film #Rambo, Hollywood star #Sylvester_Stallone has expressed confidence that the Indian movie's actor #Tiger_Shroff will give his best shot to the project. 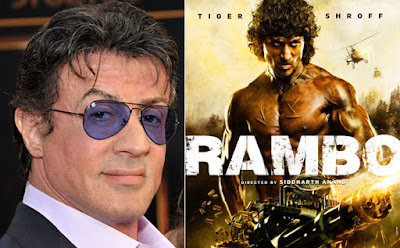 Earlier, Stallone had posted on social media: "I read recently they are remaking Rambo in India! Great character. Hope they don't wreck it."

But he clarified his stance, and has wished Tiger best of luck.

"Some people like to read into words and twist them... Good luck Tiger, go fight the good fight, keep punching. Oh, for the record, I love it when young artists get an opportunity to go for their dreams," Stallone posted on his Instagram page.
"I actually get excited in my heart whenever young artists get a rare opportunity to reach for the stars! Eye of the Tiger! I am sure he will put his heart and soul into it," he added with a snapshot of the poster of the Indian "Rambo".

Tiger was excited about the post, and responded: "There will always and only be one 'Eye of the Tiger' for us cubs. You rule the jungle! Thank you so much sir!"

The "Rambo" franchise first came to life in 1982 with "First Blood", which minted over $125 million worldwide. It was followed by a number of successful remakes, including the latest one in 2008, which earned $113 million globally.

The Hindi remake of the movie was announced at the ongoing Cannes Film Festival earlier this week. It is to be directed by Siddharth Anand and co-produced by M! Capital Ventures, Original Entertainment, Impact Films and Siddharth Anand Pictures.

It will follow life of last surviving member of an elite covert unit of the Indian Armed Forces who returns home to discover a war waging in his own land and how he unleashes mayhem by becoming an unstoppable machine after tough training.
Celebrity , Entertainment , sylvester stallone , tiger shroff