Make-up, like music, uplifts and sets your mood, says Aishwarya

Indian actress and former Miss World #Aishwarya_Rai_Bachchan has been representing India at the #Cannes_Film_Festival for over a decade -- once as a jury member, then for a movie and multiple times for a cosmetic brand. She says wearing make-up is part of her lifestyle as she belongs to the glamour industry, but she really feels it is as good as music in setting her mood for a day. 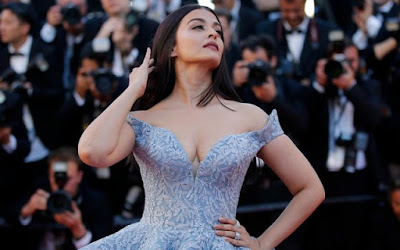 The world has seen the blue-eyed beauty in different characters in films -- whether it was the vulnerable prisoner in "Provoked", the beautiful Bengali girl in "Devdas", the young Gujarati girl in "Hum Dil De Chuke Sanam" or an angry sister in "Sarbjit". Interestingly, make-up has played a crucial role in building up her on-screen characters.

"I think we all love to play with colours to create something that reflects on every creative aspect of life -- be it make-up, be it fashion... It works like a mood uplifter. So, I think make-up is like music, it's like a creative energy, it uplifts and sets your mood," Aishwarya told media here from Cannes Film Festival via a video call.
The actress, who always experiments with her lip colours and eye shadows and at times gets criticism as well, spoke about how she celebrates the power of make-up as part of her daily life.

"We are in a profession where we are working day and night, and still have to meet people in a certain way. I might have a sleepless night with my child but the next day when I am going for a professional meeting, people shouldn't get that vibe that ‘Oh God! She is tired'," Aishwarya said.

"There comes the make-up. I get ready every morning with my lipstick, mascara and basic make-up... That gets me a fresh energy. I also think that since I have been working for so many years now, it has become a part of my life," said the L'Oréal Paris brand ambassador.

Aishwarya has had a long association with the Cannes Film Festival.

"I do not even count years now. It's all familial -- the association with the festival as well as with the brand."

Since the last couple of years, her daughter Aradhya accompanies her at the gala. At the red carpet on Saturday night, the little girl was seen walking along like a style diva with her mother.

Is she also getting familiar with the whole grandeur?

"well, I think yes, as she understands the fact that we get photographed everywhere we go, at the airport, outside our house. She knows that we go places and sees our posters everywhere. I think Aradhya is quite aware, but I do not sit down and talk about these things," said Aishwarya, who is married to actor Abhishek Bachchan.

"There are certain things in her (Aradhya) that make me smile... Like when fans come to me with a selfie request, at times she photo bombs them. At times, she asks me, 'Mamma, not me na?' as she knows I keep requesting shutterbugs not to click her pictures. In fact, the recent airport photo that you all have seen her waving at in, has a story.

"When I saw the picture, I asked her, ‘Whom were you waving your hands at?'. She said, ‘No Mumma, I was telling them, no no, no photo please!'. Isn't it cute? She is very spontaneous."

This time at the Cannes gala, Aishwarya's "Devdas" was also screened. It was first screened at the fest in 2002.

Talking about it, she said: "It is so special. I came here (at the Cannes festival) for the first time as an Indian actress with the film 'Devdas'... I still enjoy watching ‘Devdas' and I still get messages from people. It is wonderful to recount that memory this year."
aishwarya rai bachchan , Celebrity