Actor #Sunny_Deol is emotional that his son #Karan, who has "grown big", is already facing the cameras for #Pal_Pal_Dil_Ke_Paas, a movie which will mark his acting debut. 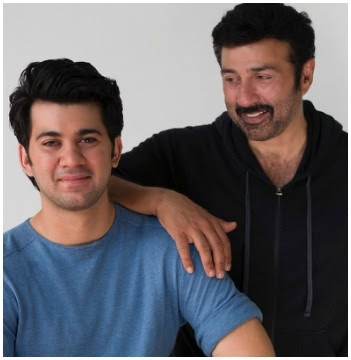 It features Sunny looking at Karan like a proud father.

Zee Studios has collaborated with Sunny to launch Karan. They have joined hands after the success of "Gadar - Ek Prem Katha". The shoot of the film began last week in Manali.

Karan's entry into filmdom marks the onset of the third generation of Deols in Bollywood. His grandfather Dharmendra is regarded as one of the best actors that Hindi filmdom has seen.

To be directed by Sunny himself, "Pal Pal Dil Ke Paas" is a love story that will be shot extensively in the exotic locales of Manali. The title of the film is inspired from the immensely popular song, a favourite of Dharmendra.
For Sunny, life has come a full circle.

"My father launched me and now I am launching my son. Karan is extremely passionate about his acting career and I am sure he will do everyone proud," he said in a statement.
Celebrity , Entertainment , sunny deol