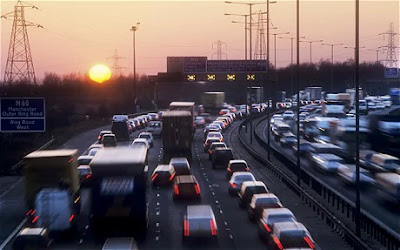 The findings showed that traffic related air pollution known as nitrogen dioxide (NO2) caused low sleep efficiency -- a measure of the percentage of time in bed spent asleep versus awake time -- and increased wake time in bed.

"The study indicates the possibility that commonly experienced levels of air pollution not only affect heart and lung disease, but also sleep quality," said lead author Martha E. Billings, MD, MSc, assistant professor of medicine at the University of Washington.
"The effect was likely given that air pollution causes upper airway irritation, swelling and congestion, and may also affect the central nervous system and brain areas that control breathing patterns and sleep," Billings added.

In the study, nearly 88 per cent participants had lower sleep efficiency and 11 per cent had nearly 60 minutes of wake time in bed.

Further, people with the highest levels of NO2 over five years had an almost 60 per cent increased likelihood of having low sleep efficiency compared to those with the lowest NO2 levels.

People with the highest exposures to small particulates (PM2.5) had a nearly 50 per cent increased likelihood of having low sleep efficiency.

Sleep deprivation may result in impairment of judgement, depression, heart problems, obesity and drastic reduction in the general well being of an individual.

For the study, presented at the ATS 2017 International Conference, the team analysed data from 1,863 participants (average age 68).