Would very much like to be 'Swasth Bharat' ambassador: Sachin Tendulkar

Master blaster #Sachin_Tendulkar, who met Prime Minister #Narendra_Modi here on Friday, says that apart from the idea of 'Swachh Bharat', the message of 'Swasth Bharat' needs to be widely promoted in the country. He feels it will be the country's "real strength". 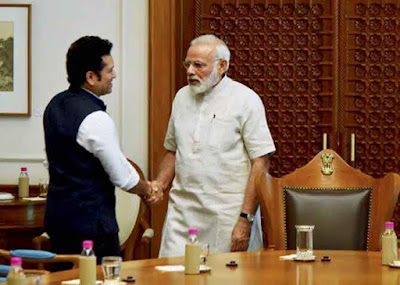 "I would want everyone to play some or the other sport. It is extremely important for us to have Swachh Bharat, of which I am one of the ambassadors, but along with that... With the young population that we have, we also need to talk about Swasth Bharat. That is equally important," Sachin told here after his meeting with Modi.

Would he take on a role as 'Swasth Bharat' ambassador?

"Very much... 110 per cent. I feel healthy India is going to be our real strength, because with (a majority of) young population, we need to be healthy. Young and unhealthy population can be dangerous. We need to address that for sure, without any doubt," said the 44-year-old, looking fit as a fiddle.
He said some physical activity "gives a level of fitness which gives you better results in any profession".

"You need not be a sportsperson... You can be a doctor, engineer, a journalist... whoever, but you should be fit."

The legendary cricketer was here to promote his forthcoming biographical film "Sachin: A Billion Dreams". He has taken the documentary drama route to tell his life's story to his fans instead of the traditional biopic which has become popular in Bollywood.

One wonders why the story of mostly sports persons are picked as subjects -- be it "Azhar", "Mary Kom" or "M.S. Dhoni: The Untold Story".

Sachin said with a smile: "Because we all start with some or the other sport in school. Whether it is 100 metre race, or 400 metre relay, or any of our Indian games -- Langdi (the one where you run on one leg), Kho Kho, Kabaddi... The journey starts there. A sport has the power to connect to people instantly. Whether we grow up and engage ourselves in playing a sport or not, that's not important."

Of his meeting with Modi, Sachin said: "It was a wonderful experience and we briefed him about the movie. There was a very positive feedback from his side. He said the story will definitely inspire the next generation."
Celebrity , sachin tendulkar