Actors #Amitabh_Bachchan, #Aishwarya_Rai_Bachchan, #Aamir_Khan, Priyanka Chopra and Deepika Padukone, apart from directors like Mrinal Sen, Buddhadeb Dasgupta and Goutam Ghose are among the Indians invited to be a part of the #Oscar_Academy's 'Class of 2017'. 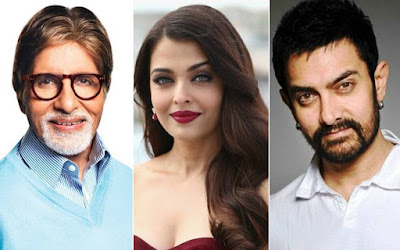 The announcement was made on Wednesday.

"We're proud to invite our newest class to the Academy. The entire motion picture community is what we make of it," Cheryl Boone Isaacs, President of the Academy of Motion Pictures, Arts and Sciences, was quoted as saying on the official Oscar website.

"It's up to all of us to ensure that new faces and voices are seen and heard, and to take a shot on the next generation the way someone took a shot on each of us," Isaacs added.
There are 774 new members from 57 countries -- a record-breaking number.

The Oscar Academy has noted not just a 359 per cent increase in women invited to join the Academy from 2015-2017, but also a marked rise in people of colour invited -- signifying the diversity it was embracing.

Even India-born Mohit Kallianpur and Mahesh Ramasubramanian, who have worked in animation and visual effects of Hollywood films like "Frozen" and "Shrek" respectively, are a part of the exhaustive list.