'Baywatch' gets ahead of 'Wonder Woman' in opening weekend in India

Indian actress #Priyanka_Chopra's maiden Hollywood project #Baywatch has given tough competition to #Gal_Gadot's superhero avatar in #Wonder_Woman at the Indian box office in its opening week. 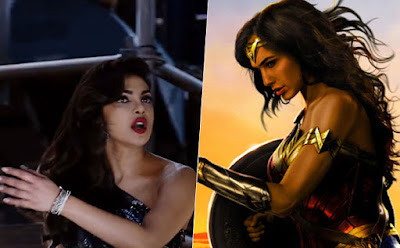 "Baywatch" has minted more than the superhero film over the weekend.

According to the numbers provided by the production banner behind "Baywatch", the film released in India on Friday in 948 screens, and its gross box office figure is Rs 10.1 crore.

If we talk about Warner Bros' "Wonder Woman", the film is doing well internationally, and topped the box office in North America with an estimated $100.5 million debut weekend, making the Patty Jenkins-directed superhero film the biggest ever opening weekend for a female director.
The action adventure entertainer, based on the DC Comics character, made its way into the theatres in India on Friday in 350 screens.

As per Warner Bros, the film has amassed Rs 7.40 crore (net) in its opening weekend collection in India.

Internationally, "Baywatch", a Paramount/Viacom Inc product, has fared poorly with critics describing the film as "shallow", "stupid", "misguided", and "wantonly crude". But the film generated mixed reviews in India with many critics lauding Priyanka for making her presence felt.

Manisha Koirala's "Dear Maya", "A Death In The Gunj" and "Dobaara - See Your Evil" released in the Hindi section on Friday.
Entertainment , gal gadot , priyanka chopra