Bollywood actress #Huma_Qureshi said her best scenes in the upcoming movie #Partition_1947 are with the legendary late actor #Om_Puri. 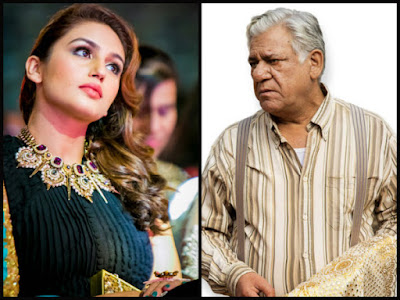 Huma said Om Puri was "a great human being apart from being a fine actor" and she is thankful to director Gurinder Chadha for making a film on such a sensitive subject.

During the trailer launch of "Partition: 1947", Huma was asked about her experience with the late actor, to which she said: "I think my best scenes in the film are with Om Puri. He played my father in the film and I would like to thank Gurinder for giving me such a lovely on-screen father. From the first meeting, he was such a wonderful person to be with."

"Last year around this time, he met my parents and we were so happy to have him. It is a great loss (that he passed away)," she said.
According to Gurinder, Om Puri was very happy to be a part of the film as he is a Punjabi and there was a Punjabi connection as well.

"He was very happy to know that I have taken such a subject for the film. In the film, though he played an old blind man, whenever the music starts we would get up and dance as he was full of life," Gurinder said.

Though the film's story revolves around the India-Pakistan partition, according to Huma, the core story is very emotional and humane.

"What I loved about the film is, it is a human story... it is heartbreaking for anyone to leave their own country for political reason."

Adding to that, Gurinder said: "We screened the film in Australia and people loved it there because it is an emotional story."