Eating in front of mirror may help you gain appetite

Having a meal in front of a mirror or even with a picture of yourself eating may be as good as taking food with a company and can make food more appealing as well as tastier, especially for the elderly, a study has showed. 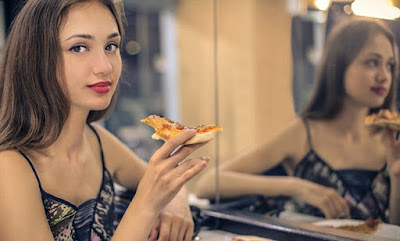 When people eat food in a company, they tend to eat more of it than when they eat alone -- a phenomenon called "social facilitation of eating".

In the study, the researchers found that when people eating alone saw themselves reflected in a mirror, they reported food as tasting better, and ate more of it, compared with when they ate in front of a monitor displaying an image of a wall.
"Our findings suggest a possible approach to improving the appeal of food, and quality of life, for older people who do not have company when they eat--for example, those who have suffered loss or are far away from their loved ones," Nobuyuki Kawai from Nagoya University in Japan.

However, the effect of "social" facilitation of eating when a mirror was present was also observed in young participants, the researchers reported in the paper published in the journal Physiology & Behavior.

Further, when mirror was replaced with photos of the volunteers eating, the volunteers still experienced an increase in the appeal of food and ate more.