The Lakmé Fashion Week #LFW Winter/Festive 2017 will give wings to four new talents who are ready to take their first step as models on the platform. 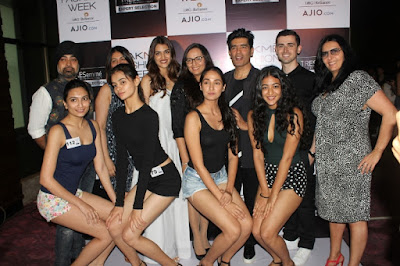 Kriti felt nostalgic to be back for LFW.

"It feels amazing to be sitting between Manish Malhotra and Lubna Adams and judging these beautiful girls. Also, it is nostalgic to be back at Lakmé Fashion Week where I started my modelling career and walked for around five seasons," said the actress.
The judges chose four winners after three competitive rounds to walk for the upcoming season: Nicole Padival, Daman Brar, Kiyara and Roshmitha Harimurthy.

The audition saw over 150 aspiring Indian and international models showcase their talent at India's most sought after model hunt.

For the first time ever, the aspirants also competed for the chance to bag a contract with IMG Models, a leader in talent discovery and model management.

"As a designer, I'm passionate about details. There is something about giving a tactile form to an idea and then further refining it - with colours, embellishments, cuts and accessories, that gives wings to creative imagination. Models are key to telling this story. They lend personification to an attitude that each of my collections represent," Malhotra said.

"A great personality is the deal-breaker when I'm selecting a model- it's the grace with which she walks onto the ramp and then goes on to owning it with her poise," he added.

LFW is credited with introducing some of the most successful faces in the Indian fashion industry including Deepika Padukone, Katrina Kaif, and Yana Gupta to name a few.
Fashion & Lifestyle , kriti sanon