We pay taxes, rent; we must pay Mother Earth too: Salman Khan

Bollywood star #Salman_Khan, who on World Environment Day launched e-cycles under his #Being_Human brand, says the endeavour is an effort to contribute towards the well-being of our earth. 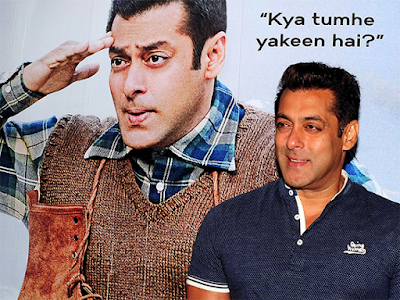 "Since the time I got into movies, my fans have accepted me... They pay to watch my movies. It's my time to give back to fans," Salman told in an email interview from Mumbai on Monday.

"We pay our taxes, we pay rent and the most important thing is to pay Mother Earth to live here," added the superstar, said to be Bollywood's highest advance tax payer for the financial year 2016-17.

The actor, once accused of poaching blackbucks near Jodhpur in 1998, said he feels very close to nature.

"We come from farm lands, my parents and grandparents. My grandfather is from Jammu. All our meals coming back from school used to come from the fruit-bearing trees in Bandra (Mumbai). So, I have planted fruit-bearing trees in my building and in my farm.
"Nature is very important... We need to plant as many trees as possible," said the "Dabangg" star, who has regaled film audiences for over two decades.

His e-cycles, priced from Rs 40,000 to Rs 57,000, are aimed towards sustainable city development, with less emissions and noise.

It's part of his offerings under brand Being Human, under which he already has apparel and jewellery segments -- sales of which are used for education and healthcare of the underprivileged in India.

There's also news that Salman will be venturing into smartphones.

Talking about the expansion plans, the actor said: "We have just started our entry into the category, we need to be careful. If people buy our products and like it, we will see. We are starting the cycles and the smartphones in small numbers and we hope to have minimum losses and maximum gain.

Fitness is something Salman has been promoting since his foray into showbiz. His chiselled physique has inspired fans and fraternity friends to work hard towards a well-built body.

Discussing the virtues of cycling, Salman said: "Since I was a child, I always cycled. Young kids are getting into high-powered bikes, and there are often accidents. E-cycles are more eco-friendly than motor cycles, it's easy to commute and it's also a good workout."

The fitness freak is often seen cycling around in Mumbai himself.

"Sitting in the car takes a lot of time. I reach the studio a lot faster and since I have been cycling all my life, I prefer it," said the 51-year-old.

"The first time my father got me a cycle on rent for 25 paise, he held the seat and I thought he was behind me, but he had left it... and I was cycling on my own. I was four or five years old," he said recounting a fond memory.

On the film front, Salman will next be seen in Kabir Khan's "Tubelight".
Celebrity , Entertainment , salman khan