Popular comedian #Johny_Lever enjoyed a lot watching his daughter #Jamie_Lever stepping into his shoes for a show. 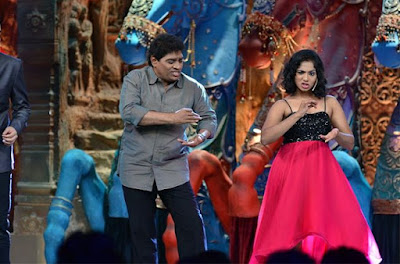 Jamie, also a comedianne, is known to impersonate industry artistes. Her most recent one was her father for an episode of "Sabse Bada Kalakar".

Jamie, the host of the Sony Entertainment Television's children's dancing reality show, essayed the character Babulal, which was portrayed by her father in the 1993 film "Baazigar".

"When I was asked to play Babulal on the show, I was beyond excitement since it was my all-time favourite Johny Lever character. Only my mother knew I was playing Babulal since I didn't know how he'd react," Jamie told.
She practiced hard and watched "Baazigar" over and over again.

"I was quite amazed by his performance and comic timing. It's truly a gift of God," she said.

Just before the telecast of the episode on May 30, she gathered courage and showed Johny her photos in which she was dressed like him.

"He said to me, 'Yeh koi naya duplicate hai kya?' (Is this a new duplicate?). He saw the episode and enjoyed it a lot," she said.

"He gives me tips on my performances. He gives feedback on how to make it funnier," she added.
Celebrity , Entertainment