Brooke Shields strips down for ad

Model-actress #Brooke_Shields flaunted her body as she stripped down to her #Calvin_Klein underwear for an advertisement. 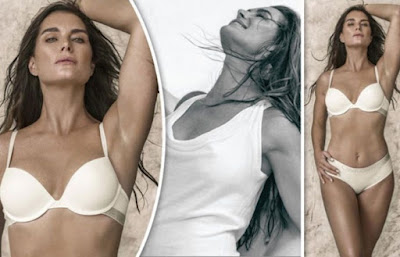 She has paid homage to her first Calvin Klein advertisement, posing 37 years later in the iconic white underwear, reports femalefirst.co.uk.

Now, "The Blue Lagoon" star has paid homage to the photoshoot which shot her to fame while doing a shoot for Social Life Magazine.

In the photoshoot, the mother-of-two flaunted her toned body while donning white lingerie from the iconic American brand.
She said after the shoot: "After the Calvin Klein show, I went back to my house and looked through all my jeans and I realised I that I don't own one pair of Calvins. I sat on the floor going through the jeans and yes, it was an emotional moment for me and I didn't want anyone else to be in the room. I wanted to have my own experience.

"Don't worry, I didn't get on the floor and do the pose. If I had done that, I would have had to be sent away. But I did look at myself in the mirror and I thought 'okay, okay, this is good... You look good. And then a really cool thing happened. I got to give two pairs of the jeans to my daughter Rowan. She is 14 years old.

"That's close to the age I was when I shot the ad. I didn't say anything when I gave her the jeans and we didn't talk about it, but it was definitely a full-circle moment."

Although the model started her career when she was a teenager, she has banned her two daughters - Rowan, 14, and Grier, 11 - from modelling until they finish college.
Celebrity , Fashion & Lifestyle