#Miss_India_2017 second runner-up #Priyanka_Kumari, from Bihar, says her parents were quite surprised when they got to know about her wish to pursue modelling. 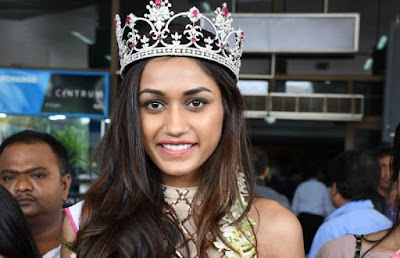 How did she convince her parents about it?

Priyanka told here: "As a child, I was quite a tomboy so, my parents were surprised to know about my ambition of taking part in a beauty contest and pursuing modelling. They never expected me to go for a beauty pageant of all the things...but yes they have supported throughout."

And finishing third in the pageant, is quite a moment for her.

"I made my parents proud. Getting placed in top three out of 30 participants was really tough because all of us are unique and beautiful in our own terms," she said.
Reminiscing about the grooming process during the Miss India contest, she said: "I've been quite tomboyish since childhood. I used to walk like a guy! And during the grooming, I had to change that completely for obvious reasons... and you know what? I won the special award of Miss Ramp walk," said Priyanka, who loves playing basketball.

After finishing her schooling from Kendriya Vidyalaya, Nasik, Priyanka finished her degree in Mechanical Engineering from Pune University in 2013.

Asked about her future plans, she said: "I always wanted to uplift the lives of people who beg on the streets, especially children and old people. So, I will start working for the cause, currently from Pune as I am based there and slowly will expand to different cities."

"My aim is to work for children who are begging on the streets...to send them to schools; old men/women to a place where their life can be better...the adults should be trained to develop some skills so that they can work instead of begging."

"Now that I have won the title, I think I have the power to influence people to ask for donation to contribute to the cause. I hope I will start the organisation soon," she added.
Celebrity , Fashion & Lifestyle