Ranbir Kapoor to start Ayan's next from mid-October

Actor #Ranbir_Kapoor, who is all geared up for his first production venture #Jagga_Jasoos, says that he will start the shooting of Ayan Mukherji's next titled #Dragon from October 15. 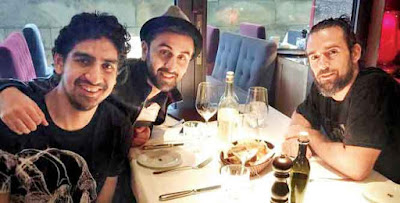 "As far as Sanjay Dutt biopic is concerned, I will head to New York on Saturday to shoot there for five days and after coming back here, there is again 10 days of shoot is left. I will also start shooting of Ayan Mukherjee film from October 15," he said.

Ranbir and Ayan have worked together for films like "Wake Up Sid" and "Yeh Jawani Hai Deewani".
Just day before the release of "Jagga Jasoos", Ranbir Kapoor's mother Neetu Singh hosted special screening of the film for Kapoor clan in Mumbai.

Talking about excitement ahead of film's release, Ranbir said, "Till the time audience doesn't come on Friday and their energy flows in theaters, we can't predict about result of the film."

"The nervousness, anxiety and excitement makes you feel alive and the day it will not happen inside me, that day I think I will die so it's a good thing that I am experiencing this, with this I feel alive," he said.

"Jagga Jasoos" is a story of a young detective, played by Ranbir, who is in search of his missing father. Katrina Kaif features as his accomplice.