Stunning Diva #SonamKapoor has graced the 5th Anniversary cover of #KhushMagazine in the most gorgeous and jaw-dropping way! 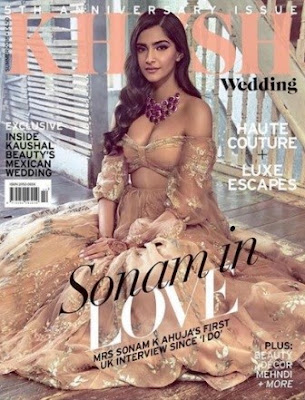 Actress Sonam Kapoor dropped the anniversary special cover on her social media profile. She captioned it, “It's finally here!!! The 5th Anniversary Issue of Khush Magazine is out now. It was an absolute pleasure working with the entire Khush team. Special shout out to Shehlaa Khan for this amazing lehenga, you always make me look so pretty! #EverydayPhenomenal @khushmag @anandahuja”

The newlywed Sonam Kapoor made the cover release super special by tagging husband Anand Ahuja in it! The actress looks regal and stunning in her traditional avatar. She is seen sporting a Lehenga by Shehlaa Khan!

On the work front, Sonam Kapoor is currently enjoying the success of Sanju opposite Ranbir Kapoor and ensemble special Veere Di Wedding.

Next, the actress will be seen in Ek Ladki Ko Dekha Toh Aisa Laga, which is directed by Shelly Chopra Dhar. It also stars Anil Kapoor, Juhi Chawla and Rajkummar Rao in the lead roles.
It tells the story of a Hindu woman in love with a Muslim man, whose life falls apart when she discovers her father's infidelity with a woman who aspires to be an actress.