Popular television actor #SaraKhan graced the launch of her first horror film #PyarEktarafa here in Mumbai. During her media interaction, the actress expressed her character in the film is performance-based and got many shades. 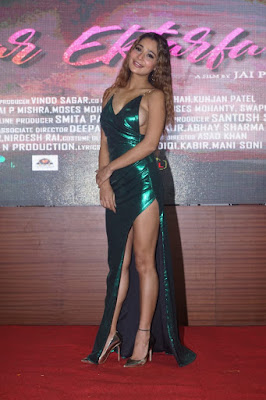 Talking about her character, Sara Khan said, “What is special about my character in this film is that, I will get to perform a lot. And the best thing for an actor is that when her character has lots of shades, which satisfies the hunger of an artist”

“So this character of mine is very strong, it got shades, and it’s a wonderful story and plus it’s a horror film, I love horror movies. I am thrilled to be part of this movie”

Sara Khan has also been part of many reality shows over the years including, Big Boss, Nach Baliye, Dus Ka Dum and more.

Switching from smaller screen to bigger screen is a mammoth undertaking for any actor but Sara is very confident about film and role. She said, “There is no difference between the two, television and films, I think both are same. It totally depends on the individual, how they take it”

The actress Sara Khan also discussed her approach for the film. She said “Soon I will get the complete script in my hands, and I will be getting into my character. It is not all that difficult to get into a character, if you’re already living it, so you automatically get under the skin of the character. So I believe in living the character”
'Pyar Ektarafa' is a volatile story of modern times that depicts the complexities and darkness of love, lust, and romance, encompassing the pious values of life like surrender, devotion, regard, and respect.